DeX can save you time and a lot of stress

Has this ever happened to you?

It’s Monday morning. As a father of two kids, it’s busy as usual. We make our way to the car. It’s 7:25am, not bad, considering we were far behind schedule 30 minutes ago. Dropping my daughter at school and I’m back behind the steering wheel. Now I’m driving my son to kindergarten. Done.

Now let me just pick my bag from the trunk and …. Oh no! I left my bag at home. And I had my laptop inside! OK, keep calm, don’t panic… What are my options? I can go back home to pick it up, which in current traffic will take around two hours, or I can go to IT and ask for a temporary laptop.

I go with the second option. Heading for IT department.

Morning guys! Can you help me out? I left my laptop at home and I need a spare just for today.

Sure. Have you raised a ticket?

Umm… no, I didn’t because I don’t have my computer.

OK, no problem. We will do it for you. Please give us an hour. We’ll let you know when it’s ready for pickup.

An hour? It took me 30 minutes to get to this point and I need to wait another hour? I should have just returned home to pick up my bag, it would have taken the same amount of time…

If you’ve been in such situation, you probably felt the heat. Now what if I tell you some of that could have been avoided? 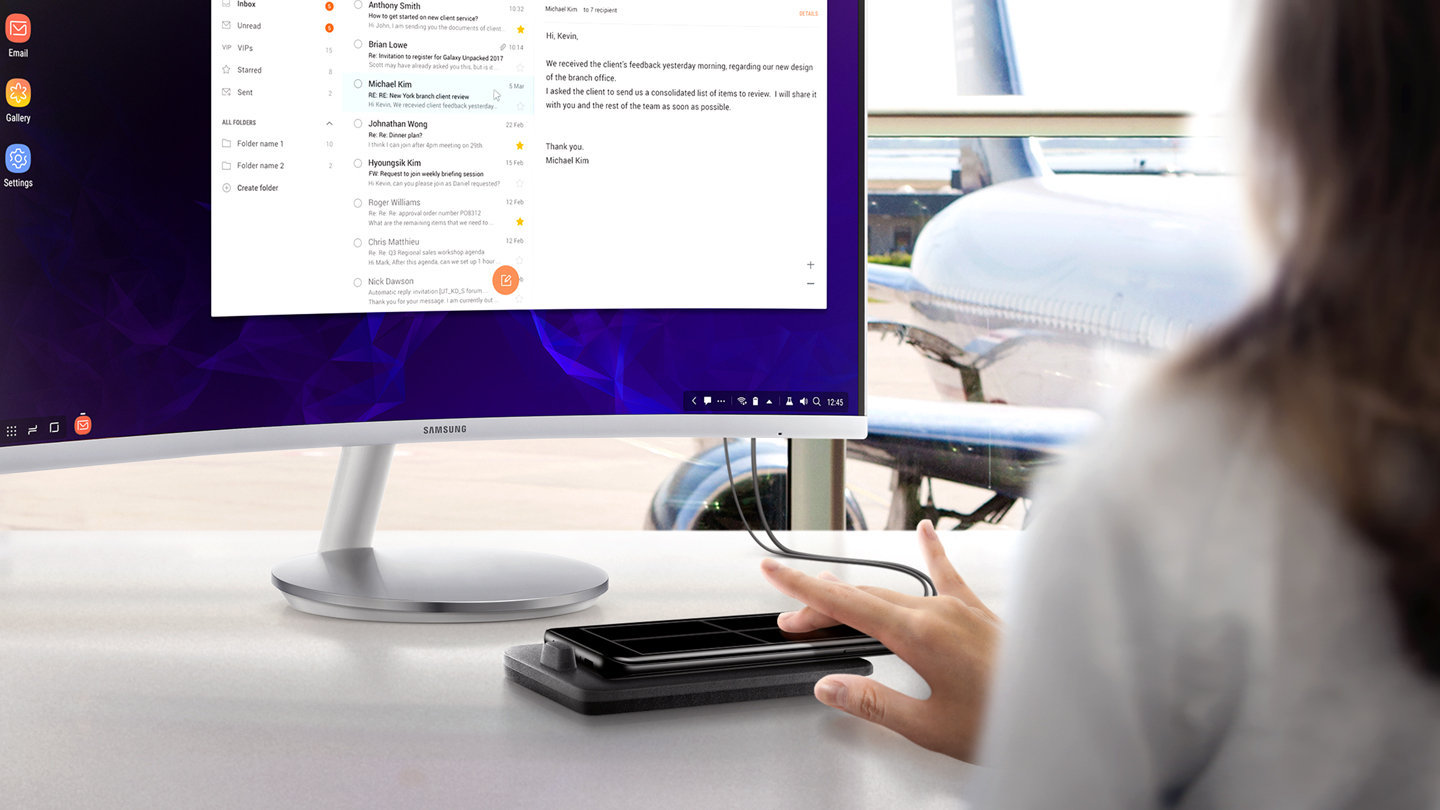 The DeX Station is an accessory that was first released with the Galaxy S8 back in 2017. DeX brings the familiar desktop experience to your Galaxy S8/S8+ and Note 8 device, letting you connect a keyboard, mouse, and monitor to your smartphone to work the same way you would on a computer.

This year Samsung updated the DeX offering with a new accessory called the DeX Pad. Thanks to a completely new design, it is more portable. With the new DeX Pad, all you need now is a monitor, since your smartphone acts as a keyboard and a touchpad. It's now also possible to connect a headset 3.5mm audio jack, so that you can answer those important calls even in a noisy environment. The new accessory has 2x USB-A, HDMI, and USB-C for fast charging.

The Samsung DeX UI also got an update. Drag and drop has been added for native apps such as Email, Messages, Notes, and others. Applications in the launcher may now be freely arranged and grouped into Folders. It is also possible to set the default audio out to a connected monitor or TV.

With Samsung DeX, MDM admin may apply certain policies to the device, such as Desktop customization. It is possible to create links to business apps directly on the DeX homescreen*. As far as security is concerned, the admin may now define the default screen timeout and the list of allowed/forbidden applications. On top of that, both the Loading Screen* and the wallpaper can be customized, allowing you to give a corporate look and feel to Samsung DeX devices.

The DeX Pad might be used in different ways.

Esperanza works on a manufacturing line in a cosmetics company. While at her desk, she has her Samsung Galaxy S9+ connected to the DeX Pad. During her morning coffee, she checks all emails and verifies the production cycle for the day. After that, she picks up her smartphone, opens the current manufacturing instruction and performs the required checks after each phase of the production process. Then she goes back to her desk, connects her device to the DeX Pad, finishes writing the report and submits it in the online system.

Jonathan is a Field Force employee at the ACME Corporation. The majority of his work is done on the go: at a customer location, in the car, or at a restaurant. While the native OS gives him enough functionality to write a short email, make a simple edit, or send a quick report, it might not be enough for him to perform the remaining tasks, such as data analysis or advanced document editing. When he returns home, he connects his Samsung Galaxy S9 to his DeX Pad and is now able to perform those complex tasks that require a home office. And all that from the same device he was carrying throughout the day.

Luis is a warehouse worker at the ACME Corporation. As part of daily routine Luis checks incoming orders on his Samsung smartphone connected to the DeX Pad. When a new order arrives he creates a list of items that need to be collected, puts his smartphone into his pocket, and goes to the storage room. He uses his smartphone to scan all items he puts into the box. His device is online, so that the stock updates instantly. Once everything is collected, he goes back to his office, puts his smartphone back in the DeX Pad, and continues to process the order.

Pascal is a doctor at Saint Frank’s hospital. At his office he uses his Galaxy Note 8 docked in a DeX Pad to check the current status in his ward. It’s time for his round. He takes his smartphone with him and checks on every patient, noting down treatment progress for each of them. When he is done, he goes back to his office and puts his device back to DeX Pad. He will now verify all the data and fine-tune treatment for all his patients.

Juan Pablo is a police officer in San Escobar. The police car he uses every day is equipped with a DeX Pad and a Samsung smartphone. The device is always connected to the Police Internal Network via a secured VPN channel which has access to all Police systems and databases. While in the car, Juan checks if the car in front of him was stolen. He pulls the car over and takes the smartphone with him. He will use it later to perform a background check of the driver. Once he finishes the checks he goes back to the police car, puts his smartphone back into the DeX Pad and writes the report. He saves time, as he is able to do it online with mouse and keyboard.

Remember that guy I mentioned in the beginning of this article? That was me. If I had a DeX Pad back then I would have saved myself a lot of time (and a lot of stress!)